Canaan †
Oprah Gail Winfrey is an American media proprietor, talk show host, actress, producer, and philanthropist, who is best known for her syndicated talk show, The Oprah Winfrey Show which aired on the ABC from 1986 to 2011, which was the highest-rated television program of its kind in history. She has also been ranked the richest African-American of the 20th century, the greatest African-American philanthropist in American history, and was for a time the world's only African-American billionaire. She is also, according to some assessments, the most influential woman in the world. In addition, she is known for her role as Sofia Johnson in Steven Spielberg's critically acclaimed period drama film, The Color Purple, in which she received an nomination for an Academy Award for Best Supporting Actress, and has also starred in historical drama films, including Lee Daniel's The Butler and Ava DuVernay's Selma.

For Disney, she voiced Eudora in the 2009 Disney animated feature film, The Princess and the Frog. She also played Sethe in and produced the 1998 Touchstone Pictures film, Beloved. In addition, she produced several telefilms for ABC and played Mrs. Which in the 2018 sci-fi film, A Wrinkle in Time.

A caricature of Oprah appeared on The Proud Family, but was voiced by comedian Debra Wilson. 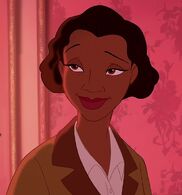 Eudora
(The Princess and the Frog)

Mrs. Which
(A Wrinkle in Time)

Oprah Winfrey behind the scenes of The Princess and the Frog.

Oprah Winfrey at premiere of A Wrinkle in Time in March 2018.

Oprah as she appears on The Proud Family.
Community content is available under CC-BY-SA unless otherwise noted.
Advertisement