Foods and Fun: A Nutrition Adventure
The Orange Bird and the Nutrition Bandwagon

Not being lonely, having friends

Being loney, having no friends

Unnamed human family
The Orange Bird is a character created by Disney for the Florida Citrus Commission as a mascot and has been a prominently featured character in Magic Kingdom's Adventureland at the Sunshine Tree Terrace located near Walt Disney's Enchanted Tiki Room.

The Orange Bird is a small bird resembling an orange, or possibly an orange with the features of a bird. Regardless, the Orange Bird used to live up north in the United States before deciding to migrate to Florida for its high quantity of citrus to eat. It would come to live in the Sunshine Tree of Adventureland.

Unlike other birds, the Orange Bird is incapable of singing or speaking and instead communicates with orange-colored thought bubbles. He is mocked by other birds as a result of this and Orange Bird generally looks for friends wherever he goes.

The Orange Bird was created in 1970 as a mascot for the Florida Citrus Commission in exchange for them sponsoring the Tiki Room attraction at Magic Kingdom. Accompanied by singer Anita Bryant, the two appeared in ads for Florida oranges and Bryant narrated a record album telling the character's story. After the Anita Bryant ad campaign was dropped in the late 70s, the Orange Bird had a solo career and appeared in a few educational shorts in the 1980s such as Foods and Fun: A Nutrition Adventure and The Orange Bird and the Nutrition Bandwagon. Eventually, the bird would fade into obscurity when Disney and the FCC severed their ties in 1987.

Years later, at Tokyo Disneyland in 2004, the Orange Bird would experience a revival as the Japanese became infatuated with the character and the character received a lot of merchandising to coincide with Japan's annual Orange Day on April 14th of that year. The Orange Bird soon returned to appearing regularly on merchandise in the US as well.

Eventually, on April 17, 2012, the Orange Bird made a proper return to the Sunshine Tree Terrace.

The Orange Bird appeared at Magic Kingdom as a walk-around character during that park's first decade. He would often be found roaming Adventureland, outside the Enchanted Tiki Room.

A figure of the character was also perched in a spot behind the counters of the Sunshine Tree Terrace, which has since been restored to the location after having spent years in the Disney Archives.

In the Magic Kingdom's Jungle Navigation Co. Ltd. Skipper Canteen there is a book called Native Orange Birds of the Southeastern United States by Dr. Sid Truss. This is an allusion to the Orange Bird with Dr. Sid Truss being a play on the word, "Citrus" to reference the Florida Citrus Commission.

A figure of the Orange Bird appears in Trader Sam's Tiki Bar at the Disneyland Hotel.

The Minnie Mouse meet 'n' greet area in Disney's Hollywood Studios is decorated with posters of Minnie's filmography. One poster is called "Mouse Pacific" with is holding the likeness of the Enchanted Tiki Room. Also featured on this poster is the Orange Bird flying over the film logo while also being listed as a cast-member.

Orange Bird merchandise can be found in retail locations at both Walt Disney World and the Disneyland Resort, despite the fact that the character otherwise never appeared at the latter.

"The Story of the Orange Bird" book and record

This Disneyland Records album was released around the time of the Orange Bird's creation. The record was accompanied by an illustrated book. The record and book tell the character's story, with Anita Bryant narrating.

The Orange Bird appears in Disney Kingdoms: Enchanted Tiki Room. Initially cameoing as a stuffed animal in the first issue, the Orange Bird appears in the flesh in the second issue, where he offers to fill in for Jose after he decided to quit. His inability to actually sing results in him being turned down, but the macaws are thankful for his offer anyways.

In issue three, Wally meets the Orange Bird while strolling through the island and sees him as a Guardian Angel to help him with his troubles. However, he is not very good at interpreting the Orange Bird's picture bubbles, leading him to make bad decisions.

In the final issue, the Orange Bird offers Saoirse the simple wordless advice of actually talking to her father and creates tickets for a stay on the Enchanted Tiki Room island for her and her father to help bond.

The Orange Bird's self-titled Little Golden Book places the Orange Bird and the Sunshine Tree in an orange grove in Florida where he has befriended the grove's farmer and birds resembling the Aracuan Bird, Sasha, and Professor Owl. When the farmer's cat Clementine bullies the birds on the farm, the Orange Bird is able to use his thought bubbles to imitate the farmer to get her to back down, just in time for the farmer himself to step in and bring the cat back inside.

The Orange Bird makes a cameo in the Inside Out book, The Bing Bong Book. 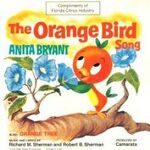 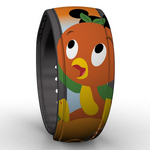 Sorcerers of the Magic Kingdom card