The Orb is an ancient artifact that contains an Infinity Stone, the Power Stone.

The Orb emits destructive energy by the masses, and is capable of annihilating an entire planet. However, the gem's power is unstable, as merely utilizing it had the potential of destroying its handlers. Its energy can only be channeled through an apparatus of sorts to be used in a concentrated form.

The Orb somehow wound up in planet Morag where it was taken by Star-Lord. Soon, Star-Lord bands together with a group of criminals and travel to Knowhere where they try to sell it to the Collector where the gem is extracted from the orb, until Tivan's assistant becomes tempted by the power and tries to use it for herself, but after the destruction of his museum, it is taken by Ronan the Accuser who uses it to channel power into his weapon. When the hammer was destroyed, the gem is released and used by the Guardians to defeat Ronan. Afterwards, it is inserted into a new container by Gamora. The Orb is entrusted to the Nova Corps on Xandar, who store it in a vault in the city.

The Orb appears in Thor's vision of the Infinity Stones and their connection in the previous years.

The Power Stone was the first of the six Infinity Stones that Thanos managed to retrieve for the Infinity Gauntlet. According to Thor, Thanos managed to acquire the Power Stone at Xandar and killed half the planet's population in the process. Thanos used the stone to threaten Thor's life so Loki would surrender the Tesseract to him, which Loki eventually did. Thanos used the Power Stone on several occasions and on his quest to retrieve all six stones and used it to fight against the Avengers. Upon acquiring all six stones, Thanos snapped his fingers and half the population of the universe became decimated.

After wiping out half of the universe's population, Thanos destroyed the Infinity Stones, the Power Stone included, to prevent anyone from undoing his work. Five years later, the Avengers decided to travel back in time to retrieve the Infinity Stones in order to undo Thanos's snap after Scott Lang discovered the use of time travel during his time in the Quantum Realm. While brainstorming the locations of the Infinity Stones throughout time, Rocket Raccoon reveals how Star-Lord stole the Power Stone on Morag back in 2014.

With that in mind, Hawkeye, Black Widow, Nebula, and War Machine travel back in time to Morag. While Black Widow and Hawkeye go to Vormir to get the Soul Stone, Nebula and War Machine stay on Morag to get the Power Stone. Before a past version of Star-Lord could steal the Power Stone, War Machine knocked him unconscious and Nebula used Star-Lord's tools to open the vault containing the Orb. She then recovered the Orb by using her mechanical arm to get through a forcefield surrounding the Orb. With their mission completed, War Machine and Nebula proceeded to return to their timeline, only for Nebula to be prevented from doing so due to her past self gaining her current self's memories. This caused an alternate Thanos to learn of the Avengers' attempt to undo the decimation and Nebula to be captured where her past self takes her place in traveling back to the current timeline.

After the Avengers returned back to the present, they created their own gauntlet and used the Power Stone, along with the other stones to restore everyone who was killed by Thanos's snap. After everyone's resurrections and defeating the alternate Thanos and his armies, Captain America traveled back in time to return the Infinity Stones to the moments they were taken where he returned the Power Stone back to Morag.

The Orb appears in the episode What If... T'Challa Became a Star-Lord?. Much like in the Sacred Timeline, Star-Lord takes the Power Stone from Morag. However, instead of selling it to the highest bidder, T'Challa intends on using it to jumpstart a solar system's dying star and save its inhabitants from extinction.

The Power Stone extracted from the Orb. 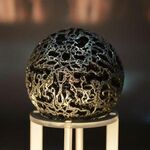