Deceased
The Organist, recently given the name Herr Victor Geist is a character found in the Haunted Mansion.

The organist was likely alive during the 19th or early-20th century where he was an organist and composer of some renown. At some point in time, he died and his ghost came to inhabit the Haunted Mansion where it would play the manor's pipe-organ for what seems like eternity.

The idea of disembodied and disappearing organists/pianists was a recurring motif throughout the development of the Haunted Mansion. Incarnations having appeared in unused scripts by Ken Anderson and Museum of the Weird tableaus by Rolly Crump. The final version of the organist was designed by Marc Davis with a sculpt by Blaine Gibson and used a Pepper's Ghost effect to disappear and re-appear.

The organ music used for ambience throughout the attraction is actually music recordings of organist Gaylord Carter being played backwards as a means of giving it a paranormal sense. For the ballroom sequence however, Gaylord Carter was opted out due to playing too sensibly in favour of organist William Sabransky who adapted Carter's improvisations to be more wild. In both cases, the recording device had to be placed in the hallway outside of the recording studio, due to how loud the music was.

The organist's presence is felt all throughout the attraction, before even entering the mansion itself. Organ music plays ominously within the queue and once again in the foyer, presumably coming from the playing of the organist.

The organist appears within the ballroom scene of the Haunted Mansion, where he plays the large pipe-organ at the head of the room. As he plays a macabre waltz version of Grim Grinning Ghosts, a group of ballroom dancer ghosts waltz behind him and disembodied wailing ghost heads emerge from the pipes of his organ.

In 2011, the Haunted Mansion in the Magic Kingdom received an expansive, interactive queue. Of the additions was a crypt inferred to hold the remains of the organist, through its use of an organ given the brand name "Ravenscroft", often incorrectly interpreted as a name for the Organist himself. His epitaph reads as, "A composer of renown and note here reposes, his melodies fade as he now decomposes; He's gone from this world of trouble and strife, but a touch of your hand brings his music to life".

During Haunted Mansion Holiday, the organist plays a waltz rendition of Kidnap the Sandy Claws by the light of jack o'lanterns in Santa Claus hats.

The Organist has been performed at events such as the 40th anniversary event.

He appears in the Disney+ special and is portrayed by Rowlf.

In the Ghost Post ARG, the Organist was identified as being Herr Victor Geist (a name which would be adapted in merchandise) and he served as one of the player's closest allies in the game.

In this story, he is identified as Wolfgang Elias Furlong and was the son of two wealthy Irish pianists. As an adult he moved to the United States where he became an organ player for a travelling-circus where he befriended a woman named Lillian O'Malley. Lillian came to marry an aristocratic man named George Gracey Jr. who invited Wolfgang to move to their home of Gracey Manor to serve as resident organist.

Gracey was a collector of arcane and occult relics however, including a piano which was haunted by the ghost of 18th century pianist Ludwig Von Baroketch who was cursed by the Angel of Death itself to haunt the piano. When Wolfgang attempted to play this piano, his hands were crushed by the wooden lid of the instrument and when he was finally freed by Madame Leota, he realized he would never play again. Consumed by grief, Wolfgang used the wires of the piano to strangle himself in an act of suicide.

A cancelled 8th issue of the Haunted Mansion comics by Slave Labor Graphics. This story would have portrayed the organist as being the leader and bus-driver of a children's choir which drove him to insanity. As a result, he murdered all of the children of the choir and stuffed their corpses in his organ, which is the origin of the organ spirits flying from its pipes.

The organist makes a cameo in this comic-book, appearing in group shots of the ballroom, playing on his organ. 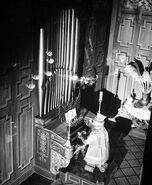 The Organist with Molly McGee In Chibi Tiny Tales 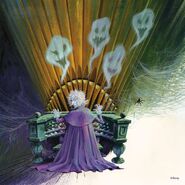