Flynn
Orlando Jonathan Blanchard Bloom is an English actor who is well known for his role as Legolas in The Lord of the Rings and The Hobbit film series.

For Disney, Bloom portrayed Will Turner, in the first three films of the Pirates of the Caribbean film series, and reprised his role in the fifth film. He was mentioned in the The Suite Life of Zack & Cody episode "The Fairest of Them All" and the Hannah Montana episodes "It's My Party, and I'll Lie if I Want To" and "Welcome to the Bungle".

Orlando Bloom at premiere of Pirates of the Caribbean: At World's End in May 2007. 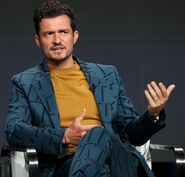 Orlando Bloom speaks at the Amazon Prime segment of the 2019 Summer TCA Tour.
Add a photo to this gallery
Retrieved from "https://disney.fandom.com/wiki/Orlando_Bloom?oldid=3902018"
Community content is available under CC-BY-SA unless otherwise noted.