Aiding Palpatine and the Galactic Empire in their plans, build the Death Star, commanding over the Military Imperial Forces, power, control

"I will not fail."
Director Orson Krennic is the main antagonist of the Star Wars movie, Rogue One. He was the supreme Military Imperial Director and the Director of Advanced Weapons Research, who was obsessed with completing the long delayed Death Star project and delivering the control over the functional battle station to Palpatine.

Orson was known to be unpredictable and volatile, who seeks nothing more than earning the favor of Emperor Palpatine.

Orson was a human male with short gray hair, blue eyes, and light skin. As a member of the Imperial Security Bureau, He wears a white Imperial military uniform with an additional cape not commonly seen on other Imperial officers.

Orson Krennic arrives on Lah'mu and discovers that his old friend Galen Erso is living a simple farming life. Krennic persuades a reluctant Galen to join the Empire, but orders his Death Troopers to fire on Lyra after she attempts to stop him.

Years later, Krennic meets with Governor Tarkin after the completion of the Death Star project, and is test-fired on Jedha to destroy Saw Gerrera's base of operations. Tarkin announces his command of the Death Star, angering Krennic who is informed of a defection from Galen Erso's division.

Krennic arranges a meeting with Galen Erso and his scientists on Eadu, asking the traitor to step forward. When nobody reacts, he orders the execution of all of them, upon which Galen intervenes. Nonetheless his Death Troopers kill the rest of the scientists and he knocks Galen to the ground, upon which the base is ambushed by Rebel fighters, killing Galen amongst them and forcing Krennic to flee.

Krennic seeks to reclaim control of the Death Star project, seeking a personal audience with the Emperor, and is summoned by Lord Vader on Mustafar. Traveling to Mustafar, Krennic was greeted by Vader on a platform overlooking the volcanic landscape of the planet. The Dark Lord expressed his concern that the Death Star had become more of a problem than the solution it was meant to be, citing Krennic's inability to keep the project as quiet as it should be. The Director defended himself and the project, claiming that he had delivered the weapon the Emperor had requested. He requested from the Dark Lord an opportunity to personally meet with Palpatine to insist that the Death Star was ready and had the power needed to destroy any resistance to the Empire. Vader was far more concerned with the awareness that was growing around the battle station's existence. Rumors had reached the higher levels of the Empire of the destruction of Jedha City and the attack on the Eadu facility by the Rebellion. While Krennic tried to shift blame onto Tarkin for ordering the demonstration on Jedha, the Dark Lord was not impressed by this futile effort and reminded the Director that the secrecy behind the Death Star project was paramount, so as to prevent open defiance from the Senate. While Imperial authorities had managed to pass off the incident on Jedha as a mining incident, Galen Erso's betrayal could have been a bitter blow. Vader instructed Krennic to ensure that no other leaks had occurred, so that he could satisfy the Emperor that the project had not been compromised.

As the Dark Lord made to leave, Krennic made a last plea for his continued control of the project, asking whether this meant he was still in charge. However, Vader's patience had run thin. While Krennic asked him to speak to the Emperor on his behalf, the Dark Lord used the Force to start choking the Director. Krennic fell to his knees as Vader warned him to temper his ambitions, lest they cause his downfall.

Learning that the Death Star plans on Scarif could be vulnerable to attack, Krennic went to talk to the General stationed there, and ordered that he have access to all of Galen Erso's communications. As he looked out onto Scarif, he suddenly saw explosions in the distance; he was now in the middle of a Rebellion attack. After troopers had failed to stop the rebels, Krennic went directly to the data vault himself—here, he shot Rebel Captain Cassian Andor, and chased after Jyn Erso, who had captured the Death Star plans which detailed a weak spot her father had created in the superweapon. He found Jyn as she transmitted the Death Star plans from the top of the Imperial installation, which was received by Admiral Raddus. Poised on killing her, Krennic was suddenly shot by Andor, who had, unbeknownst to Krennic, survived his previous encounter. Krennic was left heavily injured—he looked into the sky and saw the Death Star looming over him. He watched as the weapon he had spent so many years building charge up and fire at him, destroying Krennic and those who had survived the battle on the surface of Scarif. 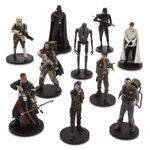 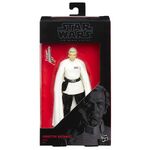 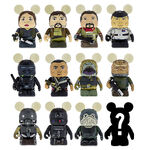 Retrieved from "https://disney.fandom.com/wiki/Orson_Krennic?oldid=2591259"
Community content is available under CC-BY-SA unless otherwise noted.