Orube is a fictional character who first appeared in W.I.T.C.H. #28 in July 2003. She becomes a member of W.I.T.C.H., the group of teenage girls who make up the Guardians, the people who guard Kandrakar, the center of the universe, from evil. She does not appear in the animated series.

Orube was a replacement for Taranee Cook, who quit the team after expressing her dislike for the Oracle for not telling them everything about their lives and their Guardianship, and constantly stringing them along like puppets. When Taranee rejoined the team some time later, Orube was welcomed to stay in Heatherfield to learn about life on Earth. She also controls no elemental power, but she is an excellent hand-to-hand fighter and had the power to emit powerful energy blasts. Orube was once one of Luba's pupils, and according to the Oracle, the finest of them all.

Originally from the planet Basilíade, she lives on Earth under the alias of Rebecca Rudolph in Mrs. Rudolph's old home, posing as her niece. When she first arrived on Earth, she had a bad case of culture shock and found it hard to fit in with humans. In the time Cedric temporarily teams up with the W.I.T.C.H. girls, Orube begins to form a relationship with him; as they were both extraterrestrials on Earth and could relate to each other.

Orube is often said to be cat-like in nature because of her keen senses (most often teased about it by Irma), like her teacher, Luba. Her senses make it easier for her to track down people as seen in Issue #35 where she tracks down the W.I.T.C.H. girls' Astral Drops.

In Cornelia's alternate Story, Orube is the new Keeper of the Heart of Kandrakar, but she gives it up to Will when Cornelia comes back in the team. 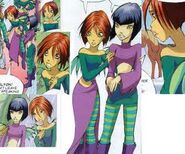