Being with his friends, video games, Bea

Clamantha's crush on him, Jocktopus bullying, Randy stealing Bea's heart, villains
Oscar is one of the three main protagonists of Fish Hooks. He is a neurotic fish and the brother of Milo. He is known to have a huge, almost obsessive crush on his friend Bea Goldfishberg. His locker is decorated with a shrine to Bea.

Oscar's an anxious, easily flustered and awkward fish who enjoys gaming and sci-fi fantasies. He has his quirks, but still likes fun.

Oscar can be seen playing video games often. He is a friendly fish that could be friends with anyone. When he is alone with Milo he seems to be his calmest, as opposed to when he is with Bea or Clamantha and he is more excitable. He seems to be into roleplay and strategy games and has taken up crocheting due to Bea and her friends teaching him. His dream is for Bea to like him back.

Oscar is Milo's roommate and brother, and Milo sometimes makes Oscar do things he doesn't want to do ("Fish Sleepover Party"). When Milo brought Murphy, he did not like this and had Murphy run away ("Doggonit"). He had to clean up all of Milo's messes ("Fail Fish"). Since they are brothers, their relationship is strong. However, they broke up when Milo was impossible to live with, because of his dirtiness. At the end, they become brothers again ("Dances with Wolf Fish").

Oscar has a huge crush on Bea, although she doesn't seem to be aware. He had drawn a picture of him and Bea surrounded by hearts. It also said, "Oscar+Bea Forever". When Bea was about to look at it, he quickly snatched it back and tore it up, laughing somewhat hysterically, showing that he doesn't exactly want Bea to find out about his crush on her ("Fish Out of Water"). He also tries to reassure Bea when she is upset about her picture. He also built a shrine to her in his locker and had quickly closed his locker when Bea stated that when a shrine "is like this, it [is creepy]." He also wasn't willing to fake date Clamantha until Bea promised she'd let him see the premiere of her first box-office hit ("Bea Stays in the Picture"). He's afraid of losing Bea ("Fish Sleepover Party"). Once he taped a picture of Bea over a doll and Oscar and Bea are seen dancing together during the theme song.

Oscar calls Bea "the most beautiful fish in the world", comparing her to Helen of Troy ("Fail Fish"). Once while shopping at the mall, Oscar spied a pair of archery braces and promptly daydreamed that if he had them, Bea would be interested. Upon receiving the bracers as a gift from Bea and Milo, he asked Bea to the movies. Her reply was "What?" and he quickly changed his tune, saying "Nothing!" ("Happy Birthfish, Jocktopus"). When Bea was about to become an adult, Oscar kept telling her that she's still in High School and not to get a job because he'll miss her ("Bea Becomes an Adult Fish"). He also comforts Bea when she gets upset after hearing that Pamela Hamster (who is the same age as them) has her own show already, attempts to warn her about the job she got on a show in Hamsterwood (since all it took was a small phone call from Milo to the studio) and tries to rescue her from said show when they figure out that she's about to be eaten. ("Hooray for Hamsterwood"). When Milo gets threatened by Randy Pincherson, he and Bea pay off his debt and act like a mother and father to him, and after he finished scolding him he grabs Bea's fin without noticing and blushes madly until she lets go of his hand ("Dollars and Fish"). Also, when Albert Glass was the one person in school who didn't like her; Oscar constantly kept saying he liked her, only for her to ignore him every single time ("Fishing for Compliments: The Albert Glass Story").

Oscar is sort of terrified of Clamantha, partly because she has a crush on him. During his "fake date" with Clamantha, she drove him to Lover's Tank and he was stuck with her until Bea and Milo rescued him. Bea pretended to be Oscar's girlfriend so that Clamantha would leave ("Bea Stays in the Picture"). One time he convinced her that his laptop (that had two web cams on it) was another clam named Webster by typing in conversations from his computer for it to have with Clamantha (via a computerized voice), eventually "Webster" ran out of battery causing her to believe that Webster hated her and dumped her. Oscar (who was the only one she would let talk to her) ended up going to her room and cheering her up by telling her that she had a heart of gold and was a good person; meaning that he does care for her to an extent despite being very scared of her ("Two Clams in Love"). Bea at one point noted that she used to think Clamantha's crush on Oscar was cute but now just sad, meaning that Clamantha's feelings for Oscar have gone on for a while.

Oscar and Clamantha on a "date".

Oscar as a human. 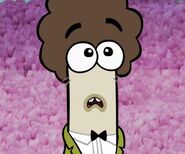 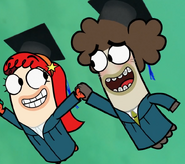 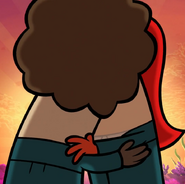 Retrieved from "https://disney.fandom.com/wiki/Oscar_the_Fish?oldid=4437986"
Community content is available under CC-BY-SA unless otherwise noted.