Disney Wiki
Register
Don't have an account?
Sign In
Advertisement
in: Characters, Character stubs, Star vs. the Forces of Evil characters,
and 10 more

“I'd stay away if I were you, that boy has a record!”
―Principal Skeeves' warning to Star

Oskar Greason is a character who appears in the Disney XD animated series, Star vs. the Forces of Evil. He is a student at Echo Creek Academy and Star Butterfly's crush.

Oskar makes his debut appearance in "Cheer Up Star", where he is seen making some irritating music. When Star first sees him, she falls over the top in love with him and secretly gives him her number. Star spends the rest of the day waiting for him to call, but he does not until she is in the middle of a fight against Ludo and his minions.

In "Girls' Day Out", Oskar reveals he has several keytars in the trunk of his car in case of emergency. However, he doesn't usually remember which of his keytars have batteries in them. In "Star on Wheels", he reveals he pretty much lives in his car and keeps junk, food, and clothes in the car. In "Starcrushed", he reveals to Star he dropped out of school to pursue his music. He was not aware until this episode that Star had magical powers and a wand. 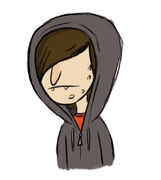