Mother Rabbit has 14 children, including Sis, Skippy, and Tagalong, but they do not count in this article. Instead, this is about the other eleven, obviously unnamed siblings. They do not say a word and hardly ever go with Sis, Skippy, or Tagalong. They are minor characters in Robin Hood.

They are first seen in the small cottage, celebrating Skippy's seventh birthday, laughing, singing, and dancing to the song. They are shocked to see the Sheriff of Nottingham walking in to steal Skippy's single farthing. Later, after Robin Hood walks in and makes up, they just stay in when Robin gives their mother some money.

They are then seen at the archery tournament. At one point, during a battle, as usual, the two babies are being held in one of their mother's arms, while the others and Tagalong are holding their hands while holding her other one.

That night, they are dancing alone in Sherwood Forest.

Next, they are seen in jail on their mother's lap, and one of them is being fed by her.

During a jailbreak caused by Robin and Little John, they are running with their mother, except for the babies, just like at the tournament.

Finally, they are seen at Robin and Maid Marian's wedding. 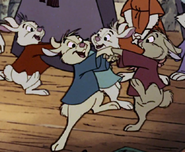 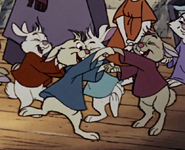