Mickey and Minnie vie for the perfect spot to sell their goods at one of Thailand's busiest floating markets. 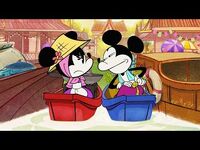