Our Friend the Atom

Disneyland
"Our Friend the Atom"

January 23, 1957
"Our Friend the Atom" is a 1957 episode of the television series Disneyland describing the benefits of atomic power. It is hosted by Dr. Heinz Haber.

A related book was published in 1956.

In 1980, an updated version called The Atom: A Closer Look was released by Disney's educational media division.

The episode was released on May 18, 2004 on Walt Disney Treasures: Tomorrow Land.[1] 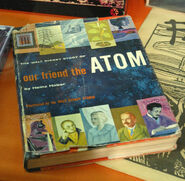