“If this is the best Earth has to offer, then this planet is just fitting to be conquered!”
―Overlord Bulovan

Overlord Bulovan is an evil alien overlord who appears in the DuckTales episode "Where No Duck Has Gone Before". He comes from the distant planet of Kronk, and seeks to capture lifeforms and use them as fertilizer.

His flagship captures the Star Phoenix with Major Courage on board. Major Courage thinks it's all just part of the show, and that Bulovan is just an actor in a costume. Still acting, Courage tells the overlord he means no harm, but Bulovan demands Earth's coordinates. The major turns in Launchpad McQuack, and Bulovan's goons extract information from him. Afterwards, Bulovan has his captives locked up.

Bulovan later shows up when Courage, Launchpad, Doofus Drake and the nephews manage to escape from prison. It isn't until Courage punches Bulovan in the stomach (getting his arm coated in slime) that the major realizes Bulovan is a real alien and not just an actor in a costume. The major flees like a coward, leaving the others to fend for themselves against Bulovan and his goons.

At the end, Bulovan decides to head for Earth, using the coordinates he extracted from Launchpad's brain. When Bulovan engages autopilot mode, his flagship gets driven way off course, since Launchpad's intellect isn't really high. 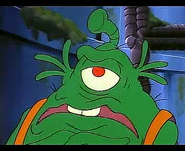