Cassandra, food, caring for others

“I have eyes in the sky.”
―Cassandra

Owl is Cassandra's pet owl in the show, Tangled: The Series.

He is very loyal to Cassandra and is trained to follow her without verbal command. Per Cassandra's teachings, he is also an attack owl, having been taught to "go for the enemy's eyes". Unlike most owls, Owl does not mind being out in the day. He can also be very expressive with his face, scolding Cass when she lied to Rapunzel about the "Challenge of the Brave" or the circumstances regarding her path of darkness and use of magic.

Much like Cass, Owl is fairly distant, and even cold at times, especially towards Pascal initially. It isn't until Pascal saves his life as Rapunzel's tower crumbled that he starts to slowly warm up to him.

Although Owl is loyal, this is not absolute; though he continued to remain by Cassandra's side following her betrayal to Rapunzel for a short while, he eventually left her, seeing she was slowly starting to lose herself and was no longer the same person she once was. When they were reunited, Owl silently scolded her for her recent actions. Owl shows he still cares for his friends and the safety and well being of others as he desperately flew back to Corona to save the Captain and protected Rapunzel and Eugene from the various bird copies of Cassandra. He returns to Cassandra's side in the end of "Plus Est En Vous".

Throughout the early part of the series, Owl has only made minor appearances, such as training alongside Cassandra in "Challenge of the Brave" and helping her with the expo decorations in "Great Expotations". In "The Quest for Varian", Owl plays a more active role when he joins Cassandra, Rapunzel, Eugene, Pascal, and Maximus on their trip to Old Corona to find the bronze Graphtyc for Varian. Throughout the episode, Owl acts very cold towards Pascal as well showing an interest in eating him. However, he did express gratitude when Pascal saved him from falling.

By season three, Owl remains by Cassandra's side even after she betrayed Rapunzel and took the Moonstone Opal for herself. However, in "Islands Apart", Owl has left Cassandra and returns to Corona alone, reuniting with Rapunzel and Eugene and leads them back to Terapi Island to save the Captain of the Guards. 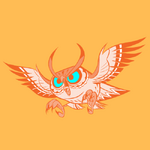 Hungry for some chameleon