Elliot, Jessica, Louis, Aimee, Kelly, and Jack
John Michael "Ozzy" Osbourne is an English singer, songwriter, television personality, and actor whose musical career has spanned over 40 years and is the lead vocalist of the English rock band, Black Sabbath.

For Disney, he voiced Fawn in the 2011 Touchstone Pictures animated film, Gnomeo & Juliet. He also guest starred in Fish Hooks as the voice of the Earth Troll. He even voiced the Duke of Drear in The 7D.

He is also the husband of Sharon Osbourne and the father of actress and fashion designer Kelly Osbourne.

He wrote the song Iron Man, which can be heard in the first Iron Man film. 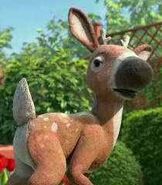 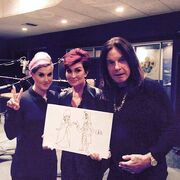 Ozzy with his wife, Sharon and their daughter, Kelly.
Add a photo to this gallery
Retrieved from "https://disney.fandom.com/wiki/Ozzy_Osbourne?oldid=3897520"
Community content is available under CC-BY-SA unless otherwise noted.