PJ Masks Headquarters
The PJ Masks are the primary trio of their own television series. They are the superheroes of the city, known for stopping villains during the night time, although on each mission, their personality issues usually get in the way. However, they quickly realize and learn from their behaviors to personally better themselves. These lessons serve to teach the viewers about the values of life. 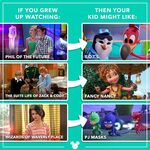