"Pacifically Peeking" is an episode of Walt Disney's Wonderful World of Color. It aired on October 6, 1968.

Moby Duck, Donald's seafaring cousin, describes life on several islands in the Pacific Ocean, using live footage of those islands. It is presented in the form of a "book," with each topic being a "chapter."

The show starts with a musical sequence describing facts about the Pacific, as well as famous explorers who sailed and discovered in the world's largest sea, including Balboa, Magellan, and Captain Cook. We then take a look at the people of Pitcairn, an island founded by the mutineers of the Bounty.

Moby then turns the pages to a chapter about the wilflife of various Pacific lands, including the the Tasmanian devil, the anteater, and the sloth. Afterward, we view an animated sequence describing the history of man's desire to explore the sea through intelligence and invention, from hollow reeds to diving suits to skindiving. At that point, we explore the deep to see various aquatic life trying to survive by devouring one another.

Finally, Moby takes us on a boat tour of the Pacific to explore the cultures and activities of various islands, including Fiji's firewalking ceremonies, Vanuatu's land-diving rituals, and Hawaii's popular sport of surfing.

Cover for the VHS release. 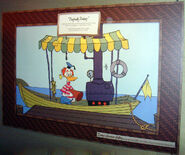 Add a photo to this gallery
Retrieved from "https://disney.fandom.com/wiki/Pacifically_Peeking?oldid=3812615"
Community content is available under CC-BY-SA unless otherwise noted.