Hercules
Hercules: Zero to Hero
Mickey's Magical Christmas: Snowed in at the House of Mouse
Mickey's House of Villains
Once Upon a Halloween

Pain: "Pain! Ow."
Panic: "And Panic! Gah."
Both: "Reporting for duty!"
―Pain and Panic reporting to their master, Hades

Neither Pain nor Panic are especially loyal to Hades, and serve him only because they fear him and possibly because he owns their souls. They appear to be immortal and capable of regeneration, but due to being demonic rather than godly, both are capable of feeling pain.

Hades uses them as pawns in his schemes, and during the movie; they are also used by him to keep an eye on Megara, shifting into bunnies, gophers, chipmunks, and birds to do so, and when he loses his temper, occasionally as punching bags.

Pain (voiced by Bobcat Goldthwait) is the fat purple-red imp with little horns and a bitten bat wing on the left side. True to his name, he is repeatedly injured through the film and animated series. When he shape-shifts, it is usually into something short or fat (or both), and generally colored in red tones. He is the more assertive of the duo, and while more cunning, less likely to think things through properly, which is what gets him into painful situations. Pain is much shorter and wider than his partner, with a large mouth filled with sharp teeth. His arms, though just as thin as Panic's, are spindly and end in four-fingered hands, as are his legs, which are much stockier and end in two-toed feet. His wings, which have purple membranes, seem too small to actually fly with. Pain's hair is maroon and styled into two horns, with his real, black horns sprouting out just behind, and his pointed tail is the same color as his hair. His nose is very small and a darker shade of pink than the rest of his skin. His yellow eyes are set very close together, with a thin, black uni-brow, and his upper eyelids having a darker shade of purple.

Panic (voiced by Matt Frewer) is the thin green-blue imp with long horns. While he is slightly less cunning than Pain, his paranoia means he is very much more cautious and rather cynical at times, so he might actually be the smarter one of the two. However, he is easily spooked, which causes accidents and messes up plans. When he shapeshifts, it is usually into something tall or thin (or both) and colored in blue tones. Panic is much thinner and taller than his partner, with very even and straight teeth, as opposed to Pain's jagged, pointed ones. His arms, though just as thin as Pain's, are much longer and end in four-fingered hands, as are his legs, which end in two-toed feet with navy toenails. His wings, which have teal-blue membranes, seem too small and seemingly useless as Pain. Panic does not have hair like his friend and instead has much larger horns that are the teal color as his skin, unlike Pain's black ones. His pointed tail is also teal blue. His nose is enormous and pointed, with prominent nostrils, sharply contrasting with Pain. His yellow eyes are much larger and set even closer together, and his lower eyelids having a darker shade of blue.

In Hercules, Pain and Panic's main role is as comic relief. They are ordered by Hades to kidnap the baby god Hercules. After they manage to do so, they then feed Hercules a potion, which would make him mortal and kill him. However, they are startled by Aclemene and Amphitrion before they can give the baby the very last drop of potion. Unaware of this, Pain and Panic attack him in the guise of snakes and discover that because he did not drink the last drop, he has retained his godly strength and they are beaten back. However, Pain decides it is better for them to not tell Hades of their failure than to admit it.

Years later, Hades discovers that Hercules is still alive when his slave Megara mentions a man named Hercules interfered when she tried to recruit Nessus, the river guardian, into joining Hades' team. Meg mentioning Hercules' name also helps Pain and Panic recall the person they failed to kill as a baby, making Hades furious at them. But Pain and Panic tell Hades that they at least made him mortal, meaning there is still a chance for Hades to kill Hercules.

Later on, Pain and Panic shift into two small, extremely cute children as bait to lure Hercules into the lair of the Hydra. When he defeats it, Hades used them to vent his rage.

Later that night, the two imps transform into a female winged horse to divert Pegasus and bind him so that he cannot help or advise Hercules. Next, they show themselves as perfectly willing and happy to help Hades humiliate Hercules after stripping him of his strength.

When Hercules frees the gods from their chains, Hermes kicks Panic and repeatedly spanked Pain with his Caduceus. Pegasus also uses them as punching bags as revenge for deceiving him and tying him up.

In their last scene, they hold a brief discussion on Hades' predicament in the River Styx, watching him and smiling evilly once they finish their discussion:

In the opening song "Rockin at the House of Mouse", Pain and Panic are seen at a table grilling hot dogs with Hades' flaming hair much to Hades anger.

in Mickey's Magical Christmas: Snowed in at the House of Mouse, they are two of the many Disney character guests to be trapped inside on Christmas Eve. 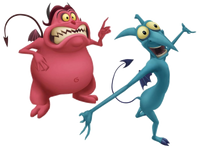 Retrieved from "https://disney.fandom.com/wiki/Pain_and_Panic?oldid=4564469"
Community content is available under CC-BY-SA unless otherwise noted.