Paint the Night was a nighttime parade that formerly at Hong Kong Disneyland, Disneyland[2][3] and Disney California Adventure.

The parade was intended to serve as a spiritual successor to the long-running Main Street Electrical Parade, which has appeared at numerous Disney parks in several different incarnations since 1972. It uses a newly-arranged version of that parade's theme song, "Baroque Hoedown", as its own, alongside an arrangement of Owl City's "When Can I See You Again?" from the 2012 Walt Disney Animation Studios film, Wreck-It Ralph.

The Disneyland version had its last run on September 5, 2016, occasionally returning as a seasonal offering during the 2016 holiday season.[5] In its place, the original Main Street Electrical Parade returned to Disneyland in 2017 for a limited time run.[6]

The Disney California Adventure version also saw the addition of a new float themed after The Incredibles. Originally scheduled to end on September 3, 2018, with the rest of Pixar Fest, the parade had its last run on November 7, 2018, instead.

On January 25, 2020, Hong Kong Disneyland version of the parade ran their final performance due to the COVID-19 outbreak's impact on China. And it is one of the attraction which hasn’t return for a long time after reopening.

At Hong Kong Disneyland, Disney Paint the Night soft-opened on September 11, 2014, and officially premiered on October 1, 2014.[9] This is the first time Walt Disney Parks and Resorts created a fully LED parade,[9] and features seven original floats containing over 740,000 individual lights.[9]

The interactive "Mickey Mouse Paintbrushes," which guests can purchase in the park, allow them to interact with the performers by changing the colors of their costumes when the brushes are activated.[9] Wearable merchandise items include the "Mickey Glow Mitt" and "Minnie Glow Bow," which change colors throughout the show[9] through the use of RFID-enabled technology.[9]

At Disneyland, Paint the Night Electrical Parade soft-opened on May 21, 2015 and officially premiered on May 22, 2015 as part of the park's Diamond Celebration[3][4] in commemoration of its 60th anniversary.[10] This version of the parade utilizes over 1.5 million LED lights,[3][4] special effects,[11] and features 76 performers.[12] The California version of the parade was inspired by the Main Street Electrical Parade.[4] It is Disneyland's first all-LED parade.[3][13] The parade lasted approximately 17 minutes.[14]

During the Diamond Celebration, the entire 24-hour event was streamed live via internet by the Disneyland Resort, including the premiere of Paint the Night parade on May 22, 2015.[1]

Like the Hong Kong version, the parade jointly features arrangements of Jean-Jacques Perrey and Gershon Kingsley's "Baroque Hoedown" and Owl City's "When Can I See You Again?". This version, now in English, features new lyrics for the parade along with vocals and arrangement from Adam Young of Owl City.[15]

Following the Diamond Celebration, Paint the Night at Disneyland performed a short run during the 2016 holiday season before Disneyland revived the Main Street Electrical Parade in January 2017 for a limited-time run which ended on August 20, 2017.[16][6]

Paint the Night officially returned to the Disneyland Resort on April 12, 2018, but this time at Disney California Adventure for Pixar Fest which began on April 13, 2018 and ran through November 7, 2018.[17]

Based on the 1953 animated film Peter Pan. Tinker Bell leads the way before a dazzling "color spiral" of sparkling fairy dust. She magically flies within this "color spiral" while spreading pixie dust all around her. Following Tinker Bell are glittering Fiber Fairies and the Pixel Painters (Hong Kong Disneyland only).

In the Disneyland version, this float is 40 feet long, with 44 universes of control and video screens, more than 850,000 points of light. Presenting the Disney Fairies such as Rosetta, Iridessa, and Silvermist and also includes Peter Pan sitting on a tribute to the "drum unit" that led the classic "Main Street Electrical Parade" from 1972 to 1996 in Disneyland. Tinker Bell's wand is handmade and is capped by a rosette from the original 1972 Main Street Electrical Parade. Also in this unit are the puppets from the World of Color Preshow: Genie, Lumiere, and Tigger.

Based on the 2001 Disney and Pixar film. The float is 11 feet wide, 21 feet long, and has nearly 17,000 points of light. The Scare Floor in Monstropolis comes to crazy, vivid life as Mike and Sulley navigate an array of vibrant, twirling doors. The five animated doors are just over 9 feet tall and contain 40 individual LED video panels that feature an endless array of appearances by "surprise visitors" from Monsters, Inc. and 2013 Disney and Pixar film, Monsters University. The animations on video screens doors were created in collaboration with Pixar Animation Studios.

Based on the 2006 Disney and Pixar film. It includes Piston Cup champion Lightning McQueen in his World Grand Prix paint job, Mack (over 54 feet long, 18 feet tall, the longest vehicle in the parade, and has 28 moving lights), and DJ. Mack is driving along in a "larger-than-life" fashion, equipped with 3D "light display" panels affixed to his sides that creates exceptional depth of image. The display contains 26,730 individual orbs. Almost 2,000 feet of LED "neon" is used in this unit.

Based on the 1989 animated film. The "under the sea" themed float is an underwater, watercolor wonderland of vibrant, glowing hues and is 32 feet long, 11 feet wide and 18 feet tall. King Triton (stands over 12 feet tall), Ariel, and a school of glowing "sea creatures" are nine fish, eight flowers, and more than 250 blades of grass fill the streets with their own briny brilliance. Sparkling animated figures that depict Sebastian and Flounder grace the float and join the party as well. Each of the 80 "sea grass bubbles" was custom cast and painted and can be individually programmed. In 2019 after the Halloween Time event, the jellyfishes from Disneyland version had replaced a group of fishes.

In the Disneyland version, the unit is followed by Nemo, his father, Marlin, and jellyfishes. Two years later in the California Adventure run, the very top of the float was removed, as it was too tall for the wires of the Red Car Trolley.

Based on the 1991 animated film Beauty and the Beast. Vibrant projections that depict memorable and iconic moments from Belle's "tale as old as time" story fill her gown and travel upwards onto a giant tapestry of electric imagery, featuring unforgettable chapters from her beloved story. Her dress has 40 custom-designed jewels and the most decorative lighting caps of any float, and the video screen contains more than 500,000 pixels and presents scenes as well as floral graphic imagery and starry night skies. Following Belle are giant glowing candelabras that are framed by lovely Dove Dancers and a series of illuminated Court Couples.

In the Disneyland version, the float is 26 feet long and the rose is 17 feet tall, and also includes Cinderella and Rapunzel.

Based on the Disney and Pixar film. Slinky Dog (32 feet long, and his ears are 18 feet tall and 11 feet across) scampers, along with Woody and Buzz Lightyear holding on. Slinky's ever-moving, ever-changing "coils" glow with eye-popping, ever-changing and iridescent patterns. The 10 spinning disks rotate at 120 RPM and are programmed with custom video content. Bringing additional excitement to the hoedown are the Lasso Poi Performers wielding light-up lassos.

Based on the 2013 Academy Award-winning hit animated film. From Arendelle comes the tallest float in the entire parade (almost 35 feet long and 30 feet tall), inspired by Elsa's Ice Palace. Anna and Elsa will grace the float, accompanied by the summer-lovable snowman Olaf and eight snow-covered trees, enhanced with 3,000 tear drop crystals. The central chandelier is made up of 72 individual "ice shards" each lit by its own LED. There are 56 over-scale scenic snowflakes and 11 individual water jet cut swirls on the float. There are six unique etched window art panels on the float. Three depict happy memories of Anna and Elsa in childhood. The other three feature Kristoff, the Trolls, and Sven.

For the California Adventure run, this float was removed, due to it being too tall for the wires of the Red Car Trolley. Rumors state that it will move to Hong Kong Disneyland in 2020, as part of its 15th anniversary celebration.

The Incredibles (Disney California Adventure Only)

Based on the 2004 Disney and Pixar film, which featuring Mr. Incredible, Elastigirl, and Frozone. This float bring all of the fun and excitement of the Incredibles’ world to life with high-tech, pop-art effects inspired by the mid-century-modern style of the films. Dynamic and innovative visual technology will also bring Violet Parr, Dash Parr, and Jack-Jack Parr to life, showcasing their powers in surprising ways! In conjunction with the release of the film, Incredibles 2, the float appeared in June 21, 2018, two days before the grand opening of Pixar Pier.

For the grand finale, Sorcerer Mickey is the star of the celebration and takes center stage -- riding high above guests' heads and leading the way to brighten up the park (14 feet tall, 7 feet wide, contains 6,944 individually programmable LED pixels with 124 "paddles" on 31 armatures) with vibrant colors from 12 feet above the street. The float is 31 feet long, has 40 universes of control and more than 10,000 points of light. Joining Mickey Mouse, on a series of Whirly-Balls from SpectroMagic, are Goofy, Donald Duck, and Minnie Mouse, each whirling vehicle has 352 points of light custom designed for the character on board. This glittering gathering also features a series of Finale Drum Majors (Hong Kong Disneyland only), Light Stick Mirror Dancers (Hong Kong Disneyland only), and Double Pinwheel Performers.

Guests in both parks are greeted with an introductory sequence. The introduction starts off with a variation of "Baroque Hoedown" followed by "Electric Fanfare", both from Main Street Electrical Parade, and an announcement nearly identical to the one heard in the Main Street Electrical Parade. Next, a verse and a chorus in the tune of "When Can I See You Again?" from Wreck-It Ralph (adapted version) plays followed by the melody of "Baroque Hoedown". The introductory sequence is longer than the normal music during the parade since it accommodates an opening voice over and an extra verse. The Hong Kong Disneyland version features a group of Cantonese singers.

In California, the Disneyland introductory music is in English and features artist Owl City.

Verse (English):
Switch on the sky and the stars glow for you
Go see the world 'cause it's all so brand new
Don't close your eyes 'cause your future's ready to shine
It's just a matter of time, before we learn how to fly
Welcome to the rhythm of the night
Something's in the air you can't deny (deny)

Hong Kong Disneyland has an exclusive show stop sequence. Guests can use their light-up Paint Brushes to change the colors of the performers during the show stop. A song unique to the sequence is performed and features both Cantonese and English lyrics. Later, the song's length is truncated when compared to the song performed at launch day. Since November 12, 2015, the stow stop had canceled with immediate effect link.

Narrator (English):
Now is your chance to Paint the Night!
Come on everyone!
Get your "Paint Brushes" ready!
Let's paint! 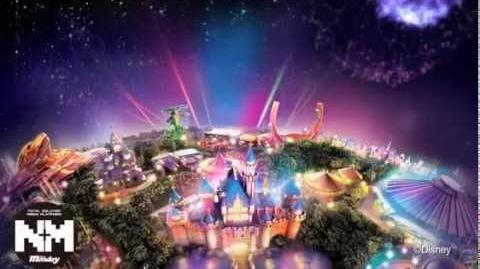 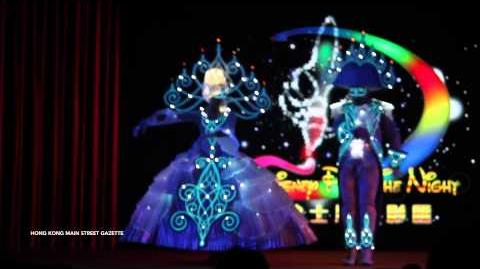 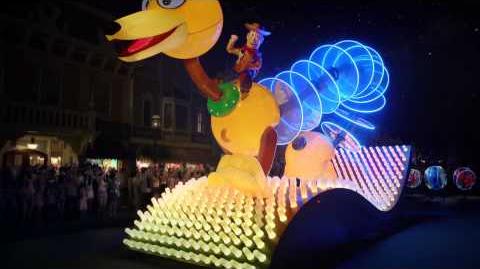 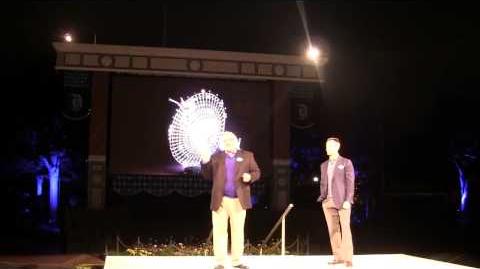 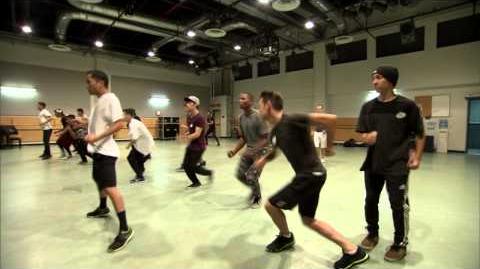 Behind the Scenes of ‘Paint the Night’ Parade Disneyland Resort 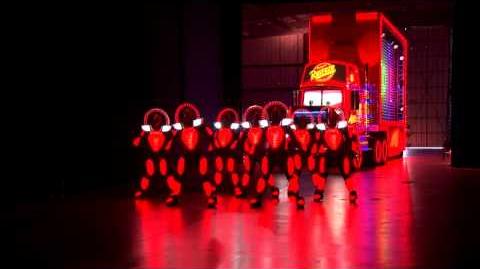 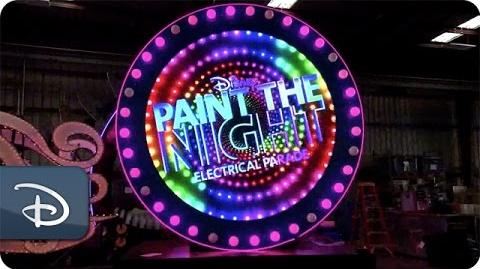 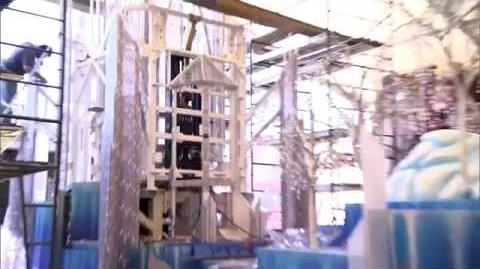