1
Pamela Ribon is an American screenwriter, TV writer, comic book writer, author, and best-selling novelist. She has written features for Walt Disney Animation Studios, like Ralph Breaks the Internet (in which she also provided the voice for Snow White, temporarily taking over for Katherine Von Till).[1] Ribon was also a narration consultant on the Disneynature documentary Bears. 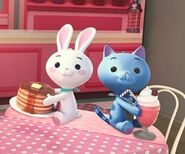 Pamela Ribon at the premiere of Moana in November 2016.