Under contract to Walt Disney Studios from 1967 to 1970, her work for Disney includes the roles of Laura Bower in The One and Only, Genuine, Original Family Band, for which she won a 1968 Filmdom's Famous Fives award from Film Daily for Best Performance by a Juvenile Actress in a Motion Picture, and Susie in the Wonderful World of Disney made-for-television film, "Smoke". She was considered for the role of Carrie Rawlins in the Disney movie Bedknobs and Broomsticks.

She also appeared with Walt Disney in a 1966 advertisement for RCA color televisions. 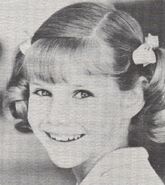 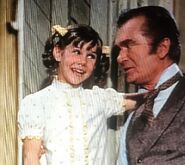 Pamelyn Ferdin and Buddy Ebsen in "The One and Only, Genuine, Original Family Band."

With Ron Howard in "Smoke."

Add a photo to this gallery
Retrieved from "https://disney.fandom.com/wiki/Pamelyn_Ferdin?oldid=4095052"
Community content is available under CC-BY-SA unless otherwise noted.