Hercules
Once Upon a Time (mentioned)

“I saw the box! I opened the box! How was I to know it would unleash misery on the world!?”
―Pandora

Pandora is a minor character in the Disney animated series, Hercules. She is a student at Prometheus Academy who suffers from constant guilt for having unleashed misery on mankind when she opened a cursed box.

Pandora's Miseries are a group of demonic imps that embody all the miseries and sins of mankind. They were all sealed away in a magical box, but due to Pandora's curious nature she opened it which caused them to be unleashed and ever since she has been forced to watch over the box and make sure no one ever opens it again. She also keeps some imps in her locker and she also tends to use the box as a lunchbox. They all appeared in "Hercules and the Green-Eyed Monster".

Pandora doesn't appear on the show. However, Pandora's Box, a black magic artifact exists and it is the only thing that can neutralize Peter Pan. Possibly, Pandora herself exists in this version. 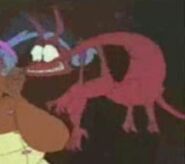