Disney Wiki
Register
Don't have an account?
Sign In
Advertisement
in: Objects, Once Upon a Time objects, Magical Objects,
and 3 more

Containing a powerful being

Storybrooke
Pandora's Box is a magical item featured on ABC's Once Upon a Time. It first appears in the seventh episode of the third season.

Pandora's Box is based on the titular item from the Greek myth.

In Storybrooke, Pandora's Box is one of the numerous items Mr. Gold keeps locked up in his pawnshop. Previously, he enchanted the box's hiding spot that can only be triggered if and when the chipped cup is placed back into its saucer in the cupboard.

After Mr. Gold goes to Neverland save Henry, he believes must die in order to defeat Peter Pan and decides to sacrifice himself, but many complications arise in which the task is left unfulfilled. Eventually, Regina presses for an alternative method of attack. To this, Mr. Gold acknowledges there is indeed a way to contain Peter Pan with a weapon. He believes the evil stored inside it will be enough to defeat him. However, since the box is in the pawnshop, Regina promises to help a mermaid, Ariel, be reunited with her true love and acquire legs without time constraints, if she accomplishes the task at hand. Due to the possibility Pan may hear them, Mr. Gold decides against telling Ariel directly what exactly the object is and instead gives her a magically enchanted sand dollar for Belle to use in finding the box.

Upon arriving on the shores of Storybrooke, Ariel approaches Leroy and the other six dwarves to ask where she can find Belle. They help pinpoint Belle's location in the town diner, to which Leroy later escorts her there. During this conversation exchange, two strangers, John and Michael, spy on them. In truth, they are the people the cloaking spell, which Belle enacted earlier, was supposed to keep out.

Ariel and Belle regroup at the pawnshop. While Belle has no idea what to do with the sand dollar, she sets it down on the table by chance and activates a projector with a message from Mr. Gold. The only clue he gives about the item's whereabouts is it can be found "with the strength of their love". She decodes the message, realizing that Gold is referring to the chipped cup., which symbolizes how much wear and tear their love has endured. By chance, she places it back into its saucer in the cupboard and brings about a spell, revealing a hidden compartment in the floor. Taking off the floor cover, Belle picks up a mysterious looking box with various designs on all sides topped off by a large circular red gem. She quickly realizes it is Pandora's Box, which legend says contains the world's darkest evil, but is assured whatever is in it will help Mr. Gold's mission to stop Pan.

However, they are abruptly ambushed by John and Michael and tied to chairs. Despite Michael's attempt at interrogating Ariel about the box, she refuses to answer and exhibits fearlessness at their threats. Only when John menaces towards using his gun on them does Belle cave in to their demands. She tells them the box is magic, yet can't see how it matters since they're likely going to destroy it.

John and Michael flee with Pandora's Box with intentions of destroying it. after escaping from their imprisonment, Belle determines that their aggressors need a dwarf's pickax to break the box, so they head to the mines. Luckily, Ariel and Belle catch up just in time before John manages to smash the box to bits. They try to intimidate Ariel and Belle into leaving or else harm will come to them. Belle ignores their warnings and pulls a switch, setting a speeding mine cart on the tracks, which inevitably knocks John and Michael off their feet. With time on her side, Belle rushes over to reclaim Pandora's Box and kicks away their gun.

The two men begin pleading with Belle to reconsider what else is at stake if she takes the box. Belle perceives they care only about annihilating magic, but it turns out to be a misunderstanding. Instead, John and Michael have been forced to follow Pan's orders for nearly one hundred years to keep their imprisoned sister, Wendy, alive. Therefore, they must stop Pandora's Box from getting to Neverland in order to be sure of their sister's safety and release. Even though they initally doubt her, Belle manages to convince them that the box will enable Mr. Gold to defeat Pan and save Wendy as well. They agree, and Belle hands over Pandora's Box to Ariel on her journey back to Neverland.

Once there, Ariel delivers the box to Mr. Gold and is rewarded by Regina with permanent control over her ability to turn human. Before Ariel heads back to Storybrooke, she informs them about Wendy and urges that they must save her, too, to which Mr. Gold affirms he will do his best. 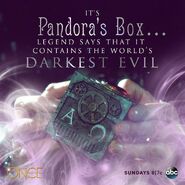