February 12, 2022
"Papaganda" is the second segment of the sixty-second episode of Big City Greens.

Following another successful day at the market, the Greens have wiped out their produce and pack it up for the day. Bill reveals that he was so confident that he grew an extra amount of blackberries. The rest of the Greens are annoyed to hear this as blackberries are difficult to grow due to their thorns and the fact that they need to get up extra early to pick them. Bill cannot understand why they cannot be positive like him and comes across a decorum stand called Janice's Niceties. Janice listens to Bill and his problems and gives him a wooden plaque that says "Live, Laugh, Love" on it. Bill is impressed and decides to make this his new philosophy.

The following morning, Bill gets the rest of the family up early at dark and shows off his live, laugh, love mantra. While Tilly immediately takes to it, Cricket and Gramma Alice find it ridiculous and begrudgingly do all the picking while Bill and Tilly, ironically, do not do any and simply repeat the live, laugh, love mantra. Finally fed up, Cricket and Alice plot to escape after Bill takes on a more cult-like mentality. Suspecting them, Bill sends Tilly to spy on them as they head to Gloria's Café. Cricket and Alice agree to destroy the numerous signs that Bill had bought, but upon returning home, Bill and Tilly are onto them and capture and brainwash them with the mantra.

Later, Cricket and Alice are more compliant to the live, laugh, love mantra, but have completely lost all of their senses and normality. Bill recognizes this and snaps; realizing that living with pure positivity is impossible and destroys the signs. Cricket, Tilly and Alice all admit to things they hate about picking blackberries, as does Bill who realizes that being honest makes him feel better and that he does not need to be positive all the time. The Greens all decide to pick blackberries together as a family, while also complaining, as Janice narrates the lesson of the episode before adding a plug in for a new mug she is selling. 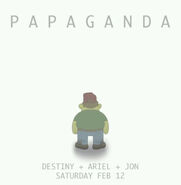