Asian with long black hair and a black moustache and beard

Swordsman and one of Milady de Winter's henchmen

Losing and the musketeers

Parker is a minor character from the 1993 film, The Three Musketeers.

Parker is one of Milady de Winter's servants. He helps her with her mission for Cardinal Richelieu. Along the way, he helps kidnap D'Artagnan. Later, he is seen trying to fight Porthos on the Persephone only to be easily defeated by him. 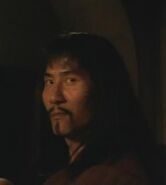 Parker knocking D'Artagnan down with a few kicks

Parker's defeat
Add a photo to this gallery

Retrieved from "https://disney.fandom.com/wiki/Parker?oldid=4018566"
Community content is available under CC-BY-SA unless otherwise noted.