Fix-It (robotic dog)
Pat is a hammer who is talkative, clumsy, and not very intelligent. He is obsessed with nails. In the episode "Firehouse Tools" he is revealed to be a real fireman. He bonds with Rusty and Dusty.

Pat is mostly a sky blue color with eyes, a claw on the back and hammer for a nose.

He is talkative, clumsy, and not very intelligent. Pat acts as if he was an individual as in he will state he is a hammer as his answer to every response. He introduced Turner to blue cheese and tuna sandwiches, who didn't like due to the smell but ended it scarfing it down after his first bite. Turner is always annoyed by Pat. 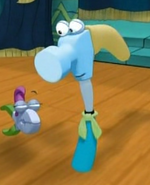 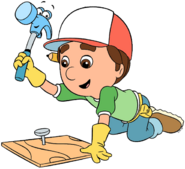 Retrieved from "https://disney.fandom.com/wiki/Pat?oldid=4294280"
Community content is available under CC-BY-SA unless otherwise noted.