Kerry, Tara, and Sean †
Patricia Ann "Pat" Carroll is an American actress, voice actress, and singer, who is best known for voicing Ursula in the 1989 Disney animated feature film, The Little Mermaid and the TV series. She returned to The Little Mermaid franchise in 2000 to provide the voice of Ursula's sister, Morgana, in Return to the Sea and later reprised the voice of Ursula in House of Mouse, the Kingdom Hearts video games, and The Wonderful World of Mickey Mouse. She also voiced Nanny/Granny in My Neighbor Totoro and Old Lady Crowley in the first season of Tangled: The Series, as well as Treeny in A Goofy Movie. 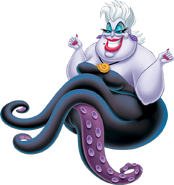 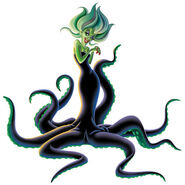 Morgana
(The Little Mermaid II: Return to the Sea) 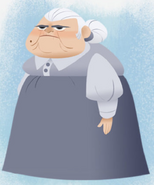 Pat Carroll behind the scenes of The Little Mermaid.

Pat Carrol with (l-r) Tara Strong, Buddy Hackett, Jodi Benson, and Samuel E. Wright at the premiere of The Little Mermaid 2: Return to the Sea in October 2000.

Pat Carroll with Jodi Benson at Disney California Adventure in June 2011.
Add a photo to this gallery
Retrieved from "https://disney.fandom.com/wiki/Pat_Carroll?oldid=4532047"
Community content is available under CC-BY-SA unless otherwise noted.