Disney Wiki
Register
Don't have an account?
Sign In
Advertisement
in: Characters, Jake and the Never Land Pirates characters, Dogs,
and 7 more

Patch first appeared in the episode "The Pirate Pup!" where the rambunctious pup sneaks aboard the Jolly Roger and runs off with one of Captain Hook's boots, causing Hook and his crew to chase Patch all across Neverland in attempt to retrieve his boot back.

Patch returns in the episode "The Golden Smee!" where the rambunctious puppy discovers a golden statue that resembles Mr. Smee while exploring with Jake and his crew on Never Land. Later in the episode, Patch aided Jake and Hook's crew to locate Mr. Smee who had taken the curse statue of the Smee's to Belch Mountain.

Patch returns in the episode "Little Red Riding Hook!," digging up many treasures with Jake and his crew when he hears his canine friend calling he rush into the Never Land Jungle, forgetting to take the treasures with him, so Izzy decides to deliver the basket of treasures to Patch before Captain Hook tries to steal it. Later, Patch and pirate pup friends confront Hook and Smee as they tried to escape with the basket but during the chase slip down a cliff only to rescued by Izzy and her pixie dust. With everyone safe and Patch's friends chasing Hook and Smee away, Izzy returned the basket of treasures back to Patch. 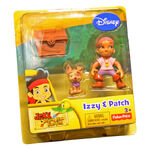