2
Patrick Fabian is an American actor. He is best known for his role on Howard Hamlin on the AMC tv series Better Call Saul.

His Disney roles include Daniel in the According to Jim episode "The Yoga Bear", Thantos in the Disney Channel Original Movies Twitches and Twitches Too, Owen in the ABC Studios TV show, Code Black, Ponarian in Agents of S.H.I.E.L.D., and Richard Morgan in the 2014 DCOM, Cloud 9.

Patrick Fabian at premiere of Cloud 9 in December 2013. 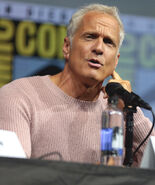 Patrick Fabian speaks at the 2018 San Diego Comic Con.
Add a photo to this gallery

Retrieved from "https://disney.fandom.com/wiki/Patrick_Fabian?oldid=3857218"
Community content is available under CC-BY-SA unless otherwise noted.