1979-present
Patrick Pinney is an American actor and voice actor. He voiced Professor O'Bowens in TaleSpin, the King in Darkwing Duck, and has done additional voice work for many other Disney animated films and shows.

Pinney attended college at the University of the Pacific in Stockton, California and studied theatre along with producer and director Dennis Jones. As well as performing in theaters in the United States, he had also done theaters in Europe. He came to Los Angeles. Some time later, he played three characters in a play. Afterwards he was approached by a producer who offered him work in animation. It was a role in a Hanna-Barbera animation. From there he made the transition from a serious stage actor to voice actor.

In the late 1980s, Pinney worked on a number of projects for both film and television. For film, he worked on G.I. Joe: The Movie, The Chipmunk Adventure, An American Tail: Fievel Goes West, Happily Ever After, Antz, Cats Don't Dance, The Prince of Egypt, Chicken Run, Flushed Away, and Curious George. In television, he voiced characters on shows, like X-Men, Men in Black: The Series, Mighty Mouse, Johnny Bravo, and Robot Chicken. 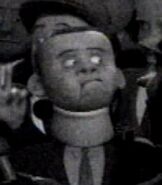