Everywhere
Alaska (at the end)

Helping lumberjacks with their job and people with their home constructions, having fun with Babe by making mountains while playing with him, Babe, his axe, roughhousing

Joe, rude people, people insulting him and his methods, the future of woodcutting, being crowded

Paul is a kind, gentle, and helpful giant, using his size and double-bladed axe to cut down trees to clear land.

As a grown giant, Paul wears a tan lumberjack's hat, a red shirt with the sleeves rolled up with a yellow undershirt underneath, brown pants with red suspenders, red socks, and black boots with hobnails on the soles.

In the TV series Aladdin, Genie is shown to transform into a version of Paul Bunyan a few times.

Paul made several cameo appearances in the television series House of Mouse. In "Ask Von Drake", he was mentioned in the song The Ludwig Von Drake Song.

In the Phineas and Ferb episode "Greece Lightning", the gang races past a pancake restaurant with the slogan "Paul Bunyan’s! Where the food is good (but not too good, eh?)" Two statues of Paul Bunyan and Babe can also be seen at the entrance of the restaurant.

In Bolt, an image of Paul Bunyan & Babe the Blue Ox appeared on the Waffle World U.S.A. Map.

In Gravity Falls, a statue of him appears in the theme song of the show, and during Weirdmageddon, the statue is brought to life and walks around town. 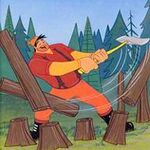 Genie as Paul again in another Aladdin episode
Community content is available under CC-BY-SA unless otherwise noted.
Advertisement