2
Solomon Hersh "Paul" Frees was an American actor, voice actor, impressionist, and screenwriter, who is best known for voicing Boris Badenov in The Rocky and Bullwinkle Show and Morocco Mole, Squiddly Diddly, and Yellow Pinkie for Hanna-Barbera's The Atom Ant/Secret Squirrel Show.

Frees has provided many narration and voice-overs for several Disney films and theme park attractions.

He provided narration for several segments on the Disney anthology television series between 1954 and 1965. He was the voice of God and Noah in Noah's Ark in 1959, the Mouse in Goliath II in 1960 and Professor Ludwig Von Drake, who first appeared on that series when it moved to NBC and changed its name to Walt Disney's Wonderful World of Color in 1961. In 1966, he dubbed the voice of Eddie (portrayed by the late Dick Wessel) in The Ugly Dachshund during post-production.

Frees also makes an appearance in The Shaggy Dog, as Dr. J.W. Galvin, a psychiatrist.

He was posthumously named a Disney Legend in 2006

Dirty Dawson
(One Hundred and One Dalmatians)

Dr. J.W. Galvin (The Shaggy Dog)
Add a photo to this gallery

Paul Frees making a live appearance in The Shaggy Dog. 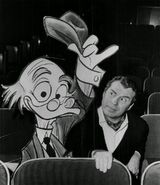 Paul Frees with his character Ludwig Von Drake.
Add a photo to this gallery

Retrieved from "https://disney.fandom.com/wiki/Paul_Frees?oldid=3991589"
Community content is available under CC-BY-SA unless otherwise noted.