For Disney, he provided the voice of RX-24, the droid captain of the StarSpeeder 3000 in the Star Tours attraction found at four Disney theme parks: Disneyland, Disney's Hollywood Studios, Tokyo Disneyland, and Disneyland Paris, a role he later reprised in the Star Wars Rebels episode "Droids in Distress".

He also voiced Fife the Piccolo in the 1997 midquel, Beauty and the Beast: The Enchanted Christmas, Lock in The Nightmare Before Christmas and Oogie's Revenge, the Milkman in Penn Zero: Part-Time Hero, Max in Flight of the Navigator, Pavel in Tron: Uprising, Dennis in the 2004 film, Teacher's Pet: The Movie, and Professor Parenthesis in the Phineas and Ferb episode special, "O.W.C.A. Files". Additionally, he portrayed the Pinball City Proprietor in Midnight Madness, and voiced Roger Rabbit in test footage of Who Framed Roger Rabbit.

Lock
(The Nightmare Before Christmas and Oogie's Revenge)

Fife
(Beauty and the Beast: The Enchanted Christmas)

Max
(Flight of the Navigator)

Paul Reubens at the premiere of Tron Uprising in May 2012. 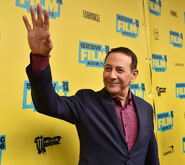