1978-present
Paul Reubens is an American actor, best known for his portrayal of Pee-wee Herman.

He is the voice of RX-24, the droid captain of the StarSpeeder 3000 in the Star Tours attraction found at four Disney parks: Disneyland, Disney's Hollywood Studios, Tokyo Disneyland, and Disneyland Paris, a role he later reprised the role for the Star Wars Rebels episode, Droids in Distress.

Lock (The Nightmare Before Christmas, and Oogie's Revenge) 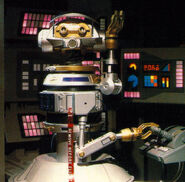 Max (Flight of the Navigator)

Roger Rabbit (Who Framed Roger Rabbit? test footage only)
Add a photo to this gallery
Retrieved from "https://disney.fandom.com/wiki/Paul_Reubens?oldid=1566372"
Community content is available under CC-BY-SA unless otherwise noted.