Not to be confused with Paul Rudd.

Maria Rugg
Paul Kevin Rugg is an American screenwriter, producer, actor, voice actor, and comedian, who played Manny the Uncanny, Alistair Flyndiggery, and Vanessa in the ABC Kids series Disney's One Saturday Morning. As well as, The Dark Lord Chuckles the Silly Piggy in the Disney Channel animated series Dave the Barbarian, Hans Rotwood in American Dragon: Jake Long Ed and Cosmo in Buzz Lightyear of Star Command. In addition, he voiced Lord Starchbottom in the series The 7D, a show in which he also wrote.

Rugg has worked extensively in the field of animation. His list of credits include writing for, co-producing, and playing the voices of several cartoon characters; first being credited as "Mr. Director" (a Jerry Lewis-esque character) from Animaniacs. Afterwards, he voiced the title characters Freakazoid! and Histeria!. Rugg was recruited to the Warner Brothers Television Animation team headed up by Jean MacCurdy and Tom Ruegger and was a key contributor to their various series in the 1990s. 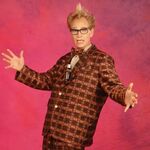 The Dark Lord Chuckles the Silly Piggy
(Dave the Barbarian)

Ned
(Earth to Ned)
Add a photo to this gallery

Retrieved from "https://disney.fandom.com/wiki/Paul_Rugg?oldid=4507312"
Community content is available under CC-BY-SA unless otherwise noted.