Successfully bought by some lemmings and Mr. Otterton

A Pawpsicle is an ice pop made by Nick Wilde and Finnick, melting a Jumbo-pop for their schemes to make money in Zootopia.

At Jumbeaux's Café, Nick and Finnick were playing as roles of a father and son. Unknowingly, Judy fell into their scheme and bought a Jumbo-pop for them.

During her meter maid travels, Judy saw Nick melting the Jumbo-pop down a gutter where it was pouring down into jars handled by Finnick. Following them, Judy saw they were making small popsicles that resemble Finnick's elephant suit footprints in Tundratown.

Then, Judy saw Nick outside a bank, selling them to a group of lemmings that they believe are "organic" for $2 for each pop.

After selling them, Judy sees them selling the popsicle sticks as redwood to a construction mouse crew in Little Rodentia, making more money.

When Judy wanted to show herself worthy of being on the police force, she promised to find Mrs. Otterton's husband. When looking for clues, Judy saw a photo of Mr. Otterton having a pawpsicle which lead her to find Nick who is a witness to his disappearance.

At the end, in a police cruiser, Nick is seen having one. After commenting about if all bunnies or Judy are terrible drivers, Judy steps on the brakes, making Nick fall in and the ice pop sticking to his eye.

Nick and Finnick making the Pawpsicles.

Nick and Finnick selling the popsicle sticks as redwood to a construction mouse crew.

Mr. Otterton with a Pawpsicle.

Nick with a Pawpsicle stuck to his eye.

A Pawpsicle stand (in the form of Jumbo Pops) in Disney Magic Kingdoms. 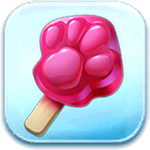