Hot weather, Captain Hook
Pearl is a recurring character from Jake and the Never Land Pirates. She is an adventurous penguin from Percy's colony who ends up becoming friends with Jake and his crew.

Pearl made her first appearance in "The Arctic Pearl". When Percy realized that Pearl was missing, he enlisted help from Jake and his crew to find her.

Pearl later returned in the episode "Into the Heart of Coldness", where she and the rest of the penguins were captured by ShiverJack. 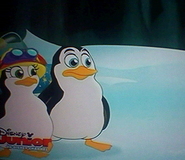 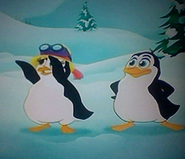