Annoying Mr. Potato Head
The Peas-in-a-Pod is one of the toys owned by Bonnie Anderson, who appears in the 2010 Disney/Pixar animated film, Toy Story 3.

Woody first sees them after getting played by Bonnie. After Bonnie flips over her toy basket and leaves to make a "spaceship", Woody backs away and bumps into the peapod. It unzips itself to reveal three plush peas named Peatey, Peanelope, and Peatrice. Peatrice asks who he is before Peanelope timidly asks if he's a real cowboy. Woody is about to answer before Peatey interrupts and calls Peanelope a "Pea-Brain" for believing he's a real cowboy since he doesn't even have a cowboy hat. Woody is about to correct him before he realizes he's lost his hat. Suddenly, Bonnie returns and they all go limb as the little girl puts them is her homemade spaceship.

The night, Bonnie's toys all sleep with Bonnie in her bed when Woody quietly sneaks off to find Bonnie's backpack with an address on it. The others quickly wake up and ask him what he's doing. Woody explains that he has another kid named Andy who's leaving for college and that he needs to get home. Peatey asks Woody where is his home, to which Woody states Andy's address (234 Elm Street). After Woody asks for a map, the toys lead him to Mrs. Anderson's computer. Later, after informing them that he escaped from Sunnyside, Woody listens to Chuckle's story that Lotso rules Sunnyside with an iron fist and is keeping Andy's toys imprisoned. Woody soon leaves to rescue them.

At the end of the film, Andy soon arrives at the Anderson's home and donates his toys to Bonnie. The two then play together with both of their toys for the rest of the afternoon. The gang then watch from Bonnie's porch as Andy slowly drives away.

The Peas-in-a-Pod briefly appears when Woody announces that Bonnie has gone on vacation for winter break. Later, they are seen sitting by the door when Peatrice tells everyone Bonnie is coming.

They make a brief cameo as a drawing on Bonnie's wall.

The Peas-in-a-Pod only makes a small appearance during the sequence of "You've Got a Friend in Me", where they are carried in a colander with other toys by Bonnie. They also make another cameo as a drawing on Bonnie's wall. It can be assumed they were in another part of the house or stored away, as they are seen in Forky Asks a Question.

The Peas-in-a-Pod return in this series in "What is Reading?". They, along with Mr. Spell, teach Forky about reading.

The Peas-in-a-Pod make their appearance with the rest of Bonnie's toys as they are around a game board set up by Hamm to tell them about the journey in the third film. 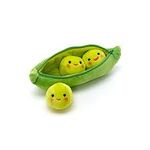 The real-life version from Freemountain Toys 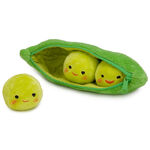 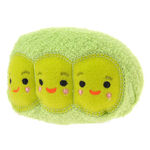 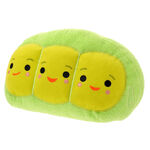 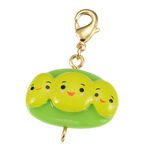 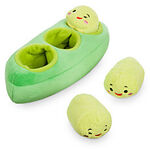 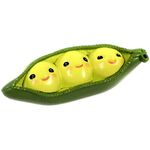