Hercules: The Animated Series
House of Mouse
A Poem Is...
Once Upon a Time (mentioned only)

Pinto (referred to by Meg)

Slender white pegasus, handsome, both blue mane and tail, giant wings on his back

Stays in Greece with Hercules, Meg, and Phil
Pegasus is a winged horse in Hercules and its television series. Pegasus acts as Hercules' personal steed. He is voiced by Frank Welker.

Described by Zeus himself as "a magnificent horse with the brain of a bird", Pegasus' behavior mixes elements of both a noble steed and a bird. Quirky behaviors of his include clicking his tongue, whistling, and at times, perching on one of Hercules' shoulders. Pegasus also seems to possesses very high revel of power to be able to free himself from chaining by gods, stamina, speed, insight and responses keen enough to avoid sudden attacks or stray shots by gods or monsters.

Pegasus was created by Zeus using clouds as a gift for his newborn son, Hercules. That night, however, Hercules was kidnapped by Pain and Panic. Pegasus did not reunite with Hercules until the teenage boy's trip to the Temple of Zeus. Zeus summons a fully-grown Pegasus while telling Hercules of their history. Pegasus remains alongside Hercules throughout their adventures. He is not very fond of Megara probably due to his jealousy for Hercules' admiration of Megara, and is openly hostile towards her at times, particularly during flight. When Hades plots against Hercules, Pegasus is lured and captured by Pain and Panic, who have assumed the form of a female Pegasus. He is rescued by Meg, who convinces Pegasus to go find Phil. After this, Pegasus treats Meg in a more amiable manner. Presumably, Pegasus remained alongside Hercules afterward.

Pegasus tags along many of Hercules' adventures and acts as a mode of transportation. In "Hercules and the Arabian Night", Pegasus challenges Aladdin's Magic Carpet when Hercules and Aladdin battle. After the boys learn they are merely a part of a plot from both of their enemies, they form an alliance while Pegasus and Carpet befriend each other.

Pegasus makes minor cameos in the series, often seen in the crowd.

Pegasus is only mentioned on the show by Captain Liam, Killian Jones's brother, like a legendary horse whose rests were used to create a magic veil, allowing their ship to fly in the sky. 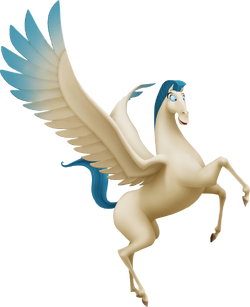 Pegasus does not appear in the first game of the series, though he does have a cup named for him. In Kingdom Hearts II however, Pegasus plays a part in the story, helping Meg escape the Underworld and assisting Sora in fighting the Hydra.

Pegasus appeared in the Hercules themed parades around the time the film first came out and appears in the bubble montage of the Florida version of Fantasmic! There was also a deleted Go the Distance sequence for World of Color that would have featured Pegasus and Hercules, but the sequence was removed for an extended Aladdin sequence rather than splitting the sequence between the two films.

The Disney Wiki has a collection of images and media related to Pegasus/Gallery.

Retrieved from "https://disney.fandom.com/wiki/Pegasus?oldid=1875662"
Community content is available under CC-BY-SA unless otherwise noted.