Nicki Barbour †
Norma Deloris Egstrom, known professionally as Peggy Lee, was an American jazz and popular music singer, songwriter, composer, actress, and voice actress, in a career spanning six decades. From her beginning as a vocalist on local radio to singing with Benny Goodman's big band, she forged a sophisticated persona, evolving into a multi-faceted artist and performer.

Lee was born in Jamestown, North Dakota, on May 26, 1920, and her family lived in several towns along the Midland Continental Railroad. She graduated from Wimbledon High School in 1937. She was the female singer for a six-piece college dance band with leader Lyle "Doc" Haines. She traveled to various locations with Haines' quintet on Fridays after school and on weekends. Later, she sang professionally over KOVC radio in Valley City, North Dakota and had her own 15-minute Saturday radio show sponsored by a local restaurant that paid her salary in food.

In Hollywood, Lee appeared in films, like The Powers Girl, Stage Door Canteen, Mr. Music, The Jazz Singer (1952), and Pete Kelly's Blues, as well as co-hosting the radio program The Chesterfield Supper Club. She also sang and wrote songs like "Somebody Else Is Taking My Place", followed in 1943 by "Why Don't You Do Right?", "Fever", "I Don't Know Enough About You", "It's a Good Day", "Golden Earrings", "Mañana", "Lover", "Mister Wonderful", and "Let's Love".

Lee provided speaking and singing voices for several characters in the Disney movie Lady and the Tramp (1955), playing the human "Darling" (in the first part of the movie), the dog Peg, and the two Siamese cats, Si and Am. She sang many of the film's songs, including "La La Lu", "The Siamese Cat Song", and "He's a Tramp" which she co-wrote with Sonny Burke.

After years of poor health, Lee died of complications from diabetes and a heart attack on January 21, 2002, at the age of 81. She was cremated and her ashes were buried in a bench-style monument in Westwood Village Memorial Park Cemetery in Los Angeles.

Darling
(Lady and the Tramp)

Si and Am
(Lady and the Tramp)

Peg
(Lady and the Tramp) 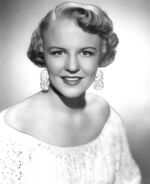 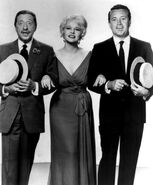 Sonny Burke and Lee during a recording session for Lady and the Tramp.