Pennsylvania, officially the Commonwealth of Pennsylvania, is a US state that is located in the Northeastern and Mid-Atlantic regions of the United States, and the Great Lakes Region. The state borders Delaware to the southeast, Maryland to the south, West Virginia to the southwest, Ohio to the west, Lake Erie to the northwest, New York to the north, and New Jersey to the east.

Pennsylvania is the 33rd most extensive, the 6th most populous, and the 9th most densely populated of the 50 United States. The state's four most populous cities are Philadelphia, Pittsburgh, Allentown, and Erie. The state capital is Harrisburg. Pennsylvania has 63 miles (101 kilometers) of coastline along Lake Erie and 57 miles (92 kilometers) of shoreline along the Delaware Estuary.

Pennsylvania borders six other states: New York to the north; New Jersey to the east; Delaware and Maryland to the southeast; West Virginia to the southwest, and Ohio to the west. Pennsylvania also shares a water border with the Canadian province of Ontario. Of the original Thirteen Colonies, Pennsylvania is the only state that does not border the Atlantic Ocean.

Actors and Crew born in Pennsylvania 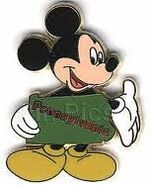 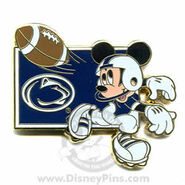 Valley Forge
Add a photo to this gallery
Retrieved from "https://disney.fandom.com/wiki/Pennsylvania?oldid=2549419"
Community content is available under CC-BY-SA unless otherwise noted.