The Director, the Agent

Extremely dangerous scenes, any harm to her daughter, the Agent

Punches the Agent out of the ambulance and quits the show with Penny and Bolt starts living a happier life in a rural home with Penny, Bolt, Mittens, and Rhino as a family.

"Bolt's not scared of anything."
"We quit!"
Penny's Mother is a minor character in Disney's 2008 animated feature film Bolt.

She is the mother of Penny (as her name suggests). Her real name is unknown. She knows how Penny feels about Bolt and tries to stand up for her when her daughter's Agent pushes the two apart. When Bolt went missing, she converts her daughter by saying that Bolt loves her and that he isn't scared in the world outside the studio and helps her to make "Lost Dog" flyers. When the studio caught fire, she was the only one that noticed her daughter missing and tried to find her.

After Bolt saved Penny and the two were placed in the ambulance, her worries were not helped when the agent believes they could use the incident for publicity. Disgusted with the agent's complete lack of care for Penny's well-being (and fed up with everything the studio's put her daughter and Bolt through), she angrily throws him out, telling him the three of them quit and slams the door in the callous jerk's face.

She and her daughter adopt Mittens and Rhino when they discovered the two at the hospital. After Penny and Bolt recover, they move to a rural home, where she grows very close to their cat, and became close like a family with the pets. 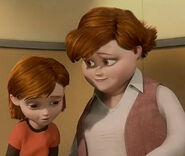 Penny with her mother

Penny asking her mother if she can take Bolt home

Penny being consoled by her mother, saying she misses Bolt so much

Penny's mother comforting Penny after succumbing from the smoke

Mom finally has had enough with the Agent.

Penny's mom furiously tosses the Agent out of the ambulance and onto the pavement.

Retrieved from "https://disney.fandom.com/wiki/Penny%27s_Mother?oldid=4211788"
Community content is available under CC-BY-SA unless otherwise noted.