One Hundred and One Dalmatians
101 Dalmatians II: Patch's London Adventure

101 Dalmatians: The Series (dropped during production)
House of Mouse

Being with Pongo, playing with her siblings

Penny is the lightest of all the puppies, and has relatively few spots. The spots she does have, including those on her ears, are very small and round. She is also one of the few girls of the litter, and is presumably depicted as "Daddy's little girl."

Penny first appears watching TV with the other puppies, and appears to be the closest to her dad, Pongo. Unlike a few of her siblings, her name has no significant meaning to her appearance, though she is notable for having a fewer amount of spots than the rest of the Dalmatians. Along with her siblings, she is kidnapped by Jasper and Horace for Cruella to make them into a fur coat. With the help of Sgt. Tibbs and her parents, she escapes and returns home.

Penny's role greatly decreased in the sequel. She is often seen alongside Lucky and Freckles, and like the rest of her siblings, is kidnapped by Horace and Jasper for Cruella, and is rescued by Patch later on.

Penny was going to be one of the major pups in the series, alongside Lucky, Cadpig, Rolly, Spot and Patch. Her original characterization was that she was very dictorial and a control freak. Disney thought there were too many main characters in the series, so Patch became an extra, while Penny was written out of the show. A preview for the series (as well as for Recess) which was shown on the 1997 tape of 101 Dalmatians has a clip of one of the artists drawing a female puppy who never appeared in the final product, who is speculated to be Penny. 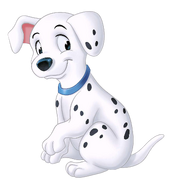 Penny's planned appearance in the series

Cadpig going by Penny's name in a foreign dub