Images of Penny from The Rescuers.

Penny dropping the bottle into the water

"But whoever adopts me, has to adopt Teddy too!"

Penny running away from the riverboat

Penny looking around to make sure the coast is clear

Penny panics when she hears Madame Medusa calling for her

Penny gets up and keeps running

Penny is recaptured by Brutus and Nero

Penny threatening Nero not to get Teddy wet

The crocodiles bring Penny back to the riverboat

Penny is worn upside down by the bottom of her panties

Snoops peering down and laughing mockingly

Penny being mocked by Mr. Snoops

Penny ordering Brutus to put her down. "Put me down, Brutus."

Brutus about to drop Penny

Penny being scolded by Snoops

Penny putting her yellow nightgown on

Penny in her yellow nightgown

Penny sobs as she believes all hope is lost

Bernard and Miss Bianca tell Penny that they are here to help her.

Penny shows to the rescuers how Brutus has torn her panties

Penny, hearing Medusa and Snoops talking about sending her back in the cave, with Bernard, and Miss Bianca

Penny being scolded again by Snoops at the pirate cave entrance

Penny being hugged by her "Auntie" Medusa

Penny falls back against the hole entrance after Medusa shoves her.

Penny trying to open the skull with the sword

Brutus once more has Penny captured upside down by her panties

"Put me down, Brutus"

and carries her back to the river boat

Penny waving at Ms. Bianca and Mr. Bernard, from the Television Screen, with the news reporter.

Penny being carried by her new adoptive parents

A group of orphan kids looking at Penny 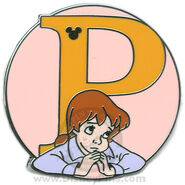 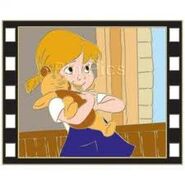 A comic book of The Rescuers 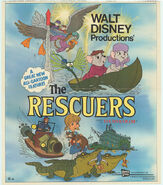 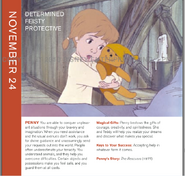 Add a photo to this gallery
Retrieved from "https://disney.fandom.com/wiki/Penny_(The_Rescuers)/Gallery?oldid=3355467"
Community content is available under CC-BY-SA unless otherwise noted.