Pepe the Bull was an animated television series pitched to Disney Television Animation by Jorge R. Gutierrez and Sandra Equiha, creators of El Tigre: the Adventures of Manny Rivera on Nickelodeon, in 2002 that was rejected and only remained as a pilot episode. It could have been Disney's first ever Flash-animated series, but this ended up being The Buzz on Maggie, which Gutierrez provided character designs for.

Gutierrez revealed that the show was not picked up because the producers wanted the series to be about Pepe's sister. They were willing to greenlight the project, but he turned them down.[1] 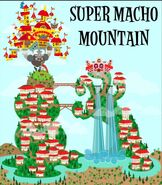 Retrieved from "https://disney.fandom.com/wiki/Pepe_the_Bull?oldid=3975025"
Community content is available under CC-BY-SA unless otherwise noted.