Percy Jackson and the Olympians

Percy Jackson and the Olympians

Percy Jackson and the Olympians is an upcoming American web television series, for Disney+. It is an adaptation of the book series of the same name.[2]

Geared towards a general audience and especially tweens, teens, and young adults, the live action series tells the fantastical story of a 12-year-old modern demigod, Percy Jackson, who's just coming to terms with his newfound supernatural powers when the sky god Zeus accuses him of stealing his master lightning bolt. Now Percy must trek across America to find it and restore order to Olympus.[3]

On May 14, 2020, author Rick Riordan announced the development of an adaptation of his book franchise, Percy Jackson. He will be acting as a writer, and both he, and his wife, will be involved in every aspect of the shows creation. The series is confirmed to last for five seasons, with each season serving as an adaptation of a book in the series.[2][8]

During Disney Investor Day 2020, the official Percy Jackson and the Olympians logo was unveiled.[9]

On March 26, 2022, it was reported that Anders Engstrom and Jet Wilkinson joined as directors for the series, and that the first season will include eight episodes.[11]

On April 11, 2022, Variety reported that Walker Scobell had been cast in the titular role.[4]

On May 5, 2022, Rick Riordan announced that Aryan Simhadri and Leah Sava Jeffries joined the cast of the series playing Grover Underwood and Annabeth Chase.[5]

On June 2, 2022, Rick Riordan announced that filming had officially begun and new cast members have been revealed.[6]

A Message from Rick Riordan - Percy Jackson and the Olympians - Disney+ 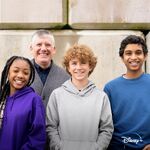 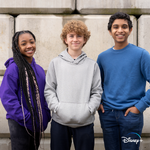