Peri
Princess Persephone, or Peri, as she likes to be called, is not an ordinary princess but a bit tomboyish as she is very athletic and very hyper, Sir Kirby felt that it would've been embarrassed about being beaten by a princess. She belongs to Alma in the TV series Doc McStuffins, appearing in "Sir Kirby and the Plucky Princess", voiced by Geena Davis.

Peri wears a magenta/pink princess gown with matching heels and sometimes wears a golden helmet with a crown-shaped opening. 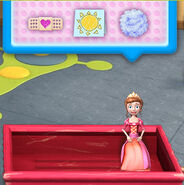 Persephone as she appears in the game Doc's Summertime Clinic