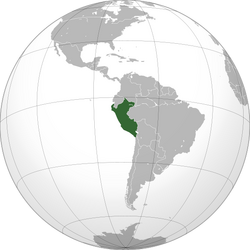 Peru is a country in South America. It is bordered by Ecuador and Colombia in the north, Brazil in the east, in the southeast by Bolivia, in the south by Chile and to the west by the Pacific Ocean. The capital city is Lima. It was home to many ancient cultures, such as the Inca empire. The Spanish conquered the country in the 16th century. Peru's geography ranges from the arid grasslands of the Pacific coast to the peaks of the Andes mountains and the lush, biodiverse rainforests of the Amazon Basin.