Peter Hans "Pete" Docter is an American film director, animator, screenwriter, storyboard artist, producer, and voice actor from Bloomington, Minnesota, who is best known for directing the Pixar animated films: Monsters, Inc., Up, Inside Out, and Soul, and as a key figure and collaborator in Pixar Animation Studios. The A. V. Club has called him "almost universally successful." He has been nominated for nine Academy Awards (three wins thus far for Up, Inside Out, and Soul - Best Animated Feature), three Annie Awards (winning six), a BAFTA Children's Film Award (which he won), and a Hochi Film Award (which he won). He has described himself as a "geeky kid from Minnesota who likes to draw cartoons."

Docter was born in Bloomington, Minnesota, growing up introverted and socially isolated, preferring to work alone and having to remind himself to connect with others. He often played in the creek beside his house, pretending to be Indiana Jones and acting out scenes. A junior-high classmate later described him as "this kid who was really tall, but who was kind of awkward, maybe getting picked on by the school bullies because his voice change at puberty was very rough."

Both his parents worked in education: his mother, Rita, taught music and his father, Dave, was a choral director at Normandale Community College. He attended Nine Mile Elementary School, Oak Grove Junior High, and John F. Kennedy High School in Bloomington. Unlike his two sisters, Kirsten Docter, who is now the violist of the Cavani String Quartet, and Kari Docter, a cellist with the Metropolitan Opera, Docter was not particularly interested in music. Nevertheless, he can be seen playing on Michael Giacchino's score on the Up Blu-ray extra features. He taught himself cartooning, making flip books and homemade animated shorts with a family movie camera. He later described his interest in animation as a way to "play God," making up nearly living characters. Cartoon director Chuck Jones and producer Walt Disney and cartoonist Jack Davis were major inspirations.

He spent about a year at the University of Minnesota studying both philosophy and making art before transferring to the California Institute of the Arts, where he won a Student Academy Award for his production "Next Door" and graduated in 1990. Although Docter had planned to work for the Disney Corporation, his best offers came from Pixar and from the producers of The Simpsons. He did not think much of Pixar at that time, and later considered his choice to work there a strange and unusual one.

Before joining Pixar, Docter had created three non-computer animations, "Next Door," "Palm Springs," and "Winter." He was a fan of the company's early short films, but he knew nothing about them otherwise. He commented in an October 2009 interview, "Looking back, I kind of go, what was I thinking?" He started at Pixar at the age of 21, and began work the day after his college graduation, the tenth employee the company hired, and its third animator.

He first met owner Steve Jobs when Jobs came to lay off some older workers. Docter instantly felt at home in the tight-knit atmosphere of the company. He has said, "Growing up... a lot of us felt we were the only person in the world who had this weird obsession with animation. Coming to Pixar you feel like, 'Oh! There are others!'"

Docter had been brought in with limited responsibilities, but John Lasseter quickly assigned him larger and larger roles in writing, animation, sound recording, and orchestra scoring. He was one of the three key screenwriters behind the concept of Toy Story, and partially based the character of Buzz Lightyear on himself. He had a mirror on his desk and made faces with it as he conceptualized the character.

Docter's fascination with character development was further influenced by a viewing of Paper Moon, he told journalist Robert K. Elder in an interview for The Film That Changed My Life:

"I like the more character-driven stuff, and Paper Moon brought that home to me in a way that I had not seen in live action, really focusing on the whole story just about characters. It was almost theatrical in the same way you might see a stage show because you’re locked in a room. It’s got to be about characters, and yet it was so cinematic, a film that couldn’t be done in any other medium. It just kind of blew my socks off."

Docter has been an integral part of some of Pixar's most seminal works, including Toy Story, Toy Story 2, A Bug's Life, and Monsters, Inc., all of which received critical acclaim and honors. He contributed to these animated films as a co-author to the scripts, and worked with CGI stalwarts such as John Lasseter, Ronnie Del Carmen, Bob Peterson, Andrew Stanton, Brad Bird, and Joe Ranft. Docter has referred to his colleagues at Pixar as a bunch of "wild stallions."

In 2004, he was asked by John Lasseter to direct the English translation of Howl's Moving Castle. Docter made his directorial debut with Monsters, Inc., which occurred right after the birth of his first child, Nick. Docter has said that the abrupt move from a complete, single-minded devotion to his career to parenting drove him "upside down" and formed the inspiration for the storyline. Docter then directed the film Up, released on May 29, 2009. He based the protagonist of Up partially on himself, based on his frequent feelings of social awkwardness and his desire to get away from crowds to contemplate. Docter appeared at Comic-Con 2008 and the 2009 WonderCon.

In May 2009, Docter remarked retrospectively to Christianity Today that he had lived "a blessed life" so far. The A. V. Club has called him "almost universally successful." He has been nominated for four Oscars (winning one for Up), three Annie Awards (winning two), a British Academy Children's Award (which he won), and a Hochi Film Award (which he won). He also won a BAFTA for best animation for UP. Accepting his Academy Award for Best Animated Feature he said, "Never did I dream that making a flip book out of my third-grade math book would lead to this." Docter served as Vice-President of Creativity at Pixar Animation Studios through June 2018, and following Lasseter stepping down from the role, became the studio's chief creative officer. TheWrap reported that Docter planned to complete the film he was currently working on, which ultimately became Soul.

He is married to Amanda Docter since 1992 and has two children, Nick and Elie (Nicholas and Elizabeth), ages 23 and 19 as of 2018, respectively. Elie has a speaking part in Up as Young Ellie.

Docter is a fan of anime, particularly the work of Hayao Miyazaki. Docter has said that Miyazaki's animation has "beautifully observed little moments of truth that you just recognize and respond to". He is also a fan of the work done by his competitors at DreamWorks as well. He has said, "I think it’s a much healthier environment when there is more diversity". Docter is also a devout Christian. Though he incorporates his personal morality into his work, he has said that he does not intend to ever make a movie with an explicitly religious message.

About the relationship between his faith and his filmmaking, Docter has said, "I don't think people in any way, shape, or form like to be lectured to. When people go to a movie, they want to see some sort of experience of themselves on the screen. They don't come to be taught. So in that sense, and in terms of any sort of beliefs, I don't want to feel as though I'm ever lecturing or putting an agenda forth." 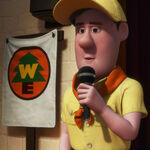 Mr. Andersen's Anger
(Inside Out)

Pete Docter behind the scenes of Toy Story.

Pete Docter supervising Amy Poehler's recording session for Inside Out.

Pete Docter at the premiere of Inside Out in June 2015.

Pete Docter and Jonas Rivera at the 88th Annual Academy awards in February 2016.