Clay, Claire, Pilar, and Angus
Peter Craver Cullen is a Canadian voice actor who is best known for voicing Optimus Prime and Ironhide in various incarnations of the Transformers franchise.

He has done a few roles for Disney, most notably voicing Eeyore from Winnie the Pooh. He also voiced Monterey Jack in Chip 'n Dale Rescue Rangers for all the episodes in Season 1 and for 20 episodes of Season 2 until Jim Cummings took over the role for the rest of the series. Various other roles are below. Additionally, he narrated the read-along storybooks of the original Star Wars trilogy.

Wooster
(The New Adventures of Winnie the Pooh)

Kerwin the Conqueror
(Adventures of the Gummi Bears)

Gritty
(Adventures of the Gummi Bears)

Peter Cullen at the premiere of Piglet's Big Movie in March 2003. 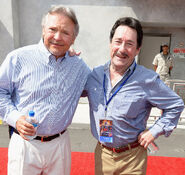